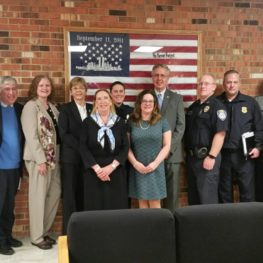 “This grant strengthens our partnership with CHR and will allow for a specially trained mental health clinician to work side-by-side with police officers when responding to calls from people in mental health emergencies, including opioid use and overdose situations,” said Suffield Police Captain Christopher McKee. “The funding will also allow us to vastly expand crisis intervention training for police officers in Suffield and surrounding towns.”

“I’m glad I could help Suffield receive federal support to aid those suffering from serious mental illness. Too often, people in crisis can’t get the help they need and end up in the criminal justice system, but mental illness is not a crime – our police officers and first responders shouldn’t be put in that position. Having a crisis worker on hand will go a long way in helping people in the community with mental illness and substance abuse issues get the help they need before it’s too late,” said U.S. Senator Christopher Murphy of Connecticut.

Captain McKee mirrored Senator Murphy’s comments stating “Those in crisis, whether they are suicidal, addicted or experiencing a mental health emergency, should be diverted from the criminal justice system and hospitals and instead, be connected with appropriate, compassionate and community-based providers like CHR,”.

Funding for this innovative partnership comes from the U.S. Substance Abuse and Mental Health Services Administration (SAMHSA) and is part of far reaching efforts to address the national opioid use epidemic. Parts of Connecticut including the north-central region have been especially hard hit by the epidemic.

Data collected for the grant application shows a significant increase in opioid deaths in Suffield, East Windsor, East Granby and Windsor Locks in recent years, proving that rural towns have not been immune to the devastation caused by opioid use. Furthermore, this four-town region has four-times as many suicides per year as the state average.

“Because of these troubling statistics, police officers are routinely called to situations that they may not be the best resource equipped to handle,” McKee explained. “Working side-by-side with trained clinicians from CHR will ensure that people in crisis will immediately get the care they need. Plus, the additional training for officers throughout the region, provided by the Connecticut Alliance to Benefit Law Enforcement (CABLE) and others will help us to respond swiftly and appropriately to people in need.”

“We have so much respect for the work of the police departments in our region and look forward to working closely with them” said Karen Hanley, LCSW, who will coordinate CHR’s efforts related to the grant and currently oversees CHR’s Mobile Crisis Response Team in the region. She will also work with all of the police departments in the collaborative to conduct crisis intervention trainings for law enforcement officers. “Together, we can save and improve lives in the region,” she said.